The Dress was white and gold. It has always been so. The woman who had purchased the dress for her best friend's wedding had put up a pic of it on her social media, and a couple of her prankster friends had claimed the dress to be black and blue, setting the stones in motion. (It is important to note that at the time they were commenting, they had just thought of it as a harmless joke.)

The woman who had uploaded the pic of the white and gold dress that she had  purchased for her best friend's wedding lost her mind when her friends said the dress was blue and black. She was a person of simple thoughts, and her mind had no place for her friends' mischief. However, their hard stand was throwing her off. She needed closure. So she did the one thing people do when they need closures. She poised the question to the Internet, with an elaborate description of how she had bought the white and gold dress for her best friend's wedding but how some of her friends were seeing it as blue and black instead.

"How did you see the dress?" asked she to the Internet.

The rest, as you may already know, is history. Well, at least part of it is. Millions of usernames gave her the much needed validation by declaring that the dress was, indeed white and gold and anyone who said otherwise was a heretic.

However, to her dismay, there were millions others who agreed with her friends about the dress being blue and black. The two groups fought vehemently over the color, and a zillion explanations on why people were seeing the dress differently started sprouting up.

Once they felt they had enough argument over the dress, they accepted an explanation that felt the most scientific, and moved on to better things like Pen Pineapple Apple Pen.

The woman, exhausted from all the debates and attention, resigned to her fate and cursed her poor eyesight. She never wore that dress, because she could not decide between white and blue earrings to go with it.

Though the world and the woman and her best friend had moved on, the incident had triggered something else. Something big. Something smart. Something dark. The millions of usernames who claimed the dress to be blue and black - they were the ones who had seen through the ploy of the woman's friends and had decided to play along. They had seen the picture of the white and gold dress as white and gold itself, since the dress was WHITE and GOLD! There were no two ways about it. Yet, they kept the debate up. It is not exactly clear why they decided to do it. Perhaps, they just wanted to watch the whole world burn. 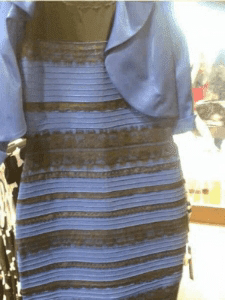