May 05, 2020
When I had first heard of Thappad, the premise had felt interesting to me. I did wait for its release, but then the Covid situation took its toll.
When the movie had its digital premiere on Amazon Prime on May 1st, I had made sure I caught the movie the very first day. Lately, I seldom share my thoughts on movies I watch, anyway, this is my two cents on it.

I saw a lot of discussion revolving around the slap and how it ended in their separation. Some of the viewers, while admitting the intensity of his action, found it a bit hard to digest that they had to separate because of this one moment of aggression.

What I felt is that it was not the slap alone that resulted in separation. The fact that he never acknowledged his mistake, and never really apologize for the same until the very end is something that hurt Amu as deeply as the public humiliation inflicted on her by the slap. Instead, initially, he tried to play it down by taking her out to dinners and buying her expensive gifts. Even at the restaurant, he's more focused on his phone and never paying any serious attention to what she has to say. It's like how his boss told him that he never hit him even though he was mad at him, not at her. That's because at least in his mind, he thought of her as lesser rather than equal. All Amu wanted was respect.

The movie also has hints that show us he thinks lowly of women. There is this one scene where he is driving and is pissed off at something. He takes out the anger by honking at a car and then wondering why they (women) drive at all. In another scene, when Amu casually says she's considering learning to drive, he mocks her saying she should first learn to make parathas properly. These are clues that he's misogynistic at heart.

Even if he had a change of heart in the end, a few good words wouldn't suffice to get her back. He needs to work towards it and show he has changed. To quote him, he needs to earn her. Especially since during the divorce case, he had even considered buying out the baby or forcing his friends who had attended the party to deny the incident.

The movie does not put all the blame on him anyway. He is only a part of an unhealthy society that is passive to toxic masculinity. The movie points fingers towards them too.

While watching the movie, I had no idea it was from the director who gave us hard-hitting movies like Article 15 or Mulk. One of the main factors which had caught my attention was the fact that Tapsee was the lead. From getting coconuts thrown at her, she has indeed come a long way to become one of the most evolved actors on screen today. Besides her choice of movies, the right stand taken by her off-screen (standing up against the Hindi imposition at IFFI is an example) are strong factors that make me a big fan. It would be good to see her doing a Malayalam movie some day. I'm pretty sure our filmmakers would have something solid to offer her. 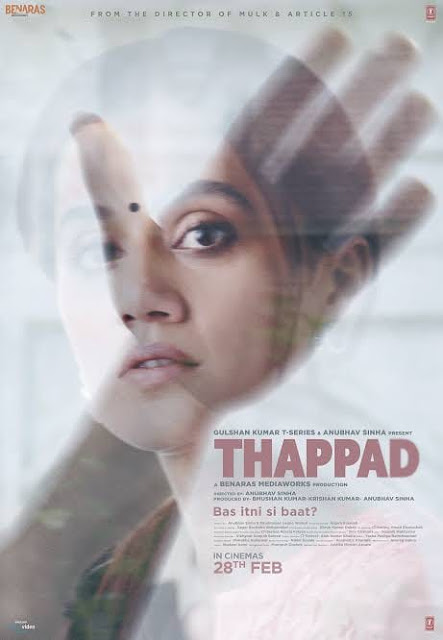