Romantic Girlfriend and the Realistic Spouse

Thus began my very first attempt at verse (or at-least it is the first one I can remember). I was in class six. You see class six marked an year of transition - from primary to secondary schooling. We had new subjects, new teachers. Our English tutor was the much feared Joseph Sir, who turned out to be much caring and loving in reality. I strongly believe that the English teachers - Joseph Sir, Indira Ma'am and the late Radhakrishnan Sir - played an immense role in identifying my penchant for English and opening the windows of creative writing within me.

Coming back to the "wave poem" - it is just a silly poem filled with rhymes - like any other school going kid is expected to write. The same year I remember Joseph sir asking each of us to write a poem as some sort of an assignment. Our English classes were during the seventh period according to the timetable. And so for the assignment, I wrote another short poem titled "Seventh period, English period", where I openly confessed my love for English.

There wasn't much significant write ups during the remaining school phase, except for the occasional misadventures on poetry for the annual school magazine. It was a matter of pride to see your name up there in the pages of magazine. (And I had stiff competition at home since my brother dear consistently filled the magazine pages with articles and wonderful pictures.)

As years rolled by, I made my transition from secondary to senior secondary classes. As I was one among the toppers, the obvious choice was science group. While Physics, Chemistry and Mathematics took the limelight, I found console in the new and interesting Computer Science, and of course in English. Doing a power point presentation on my beloved play 'A Christmas Carol' made me as happy as when my C code for the much popular "odd or even" game compiled successfully.

Schooling was over. I was at a crossroads - confused at what road to pursue. That's when I wrote for the first time something I am actually proud of even till today. Interestingly, the piece of prose was titled 'Crossroads'. The results of Entrance Examinations were also out, and I was engaged to Computer Science. I received adulation both for my admission at a Govt. Engineering College as well as for the write up. I was glad of both.

My affair with English sustained with me during the RIT days. One's writing tend to be influenced by what one reads. Unsurprisingly, most of my write ups of the initial college days drew much inspiration from Chetan Bhagat, with some of the plots being polished versions of my own one sided, romantic trysts (read monumental moments of shame). The good memories are participating in the short story competition of the annual college arts for three successive years, and winning the first prize in all three. I earned a writer's tag among the student community. I also passed my bachelors' degree in due time.

One of the major tech companies had offered me my first job opportunity. However, I opted for more campus life. I extended my engagement to Computer science and moved in to her place (yeah that could be taken literally - as this was the phase where i had moved to a hostel to do my Masters' - I was staying away from home for the first time ever). The stronger my relationship with Computer Science grew, so did my affair with English too. No more campus romance, as I was trying to experiment with unexplored themes. I discovered this amazing page called 'The Anonymous Writer' - which is a pan Indian community where amazing budding writers share their works to be read and analyzed by an equally enthusiastic readers lot. From there I was lucky to meet many young people who create magic through their wordings - particularly one lovely lass from the west of Bengal who helped me in editing what I wrote and also in correcting the silly spelling mistakes as I was (am) lazy even to proofread what I wrote. Almost all my close friends thought a Kerala-Bengal "2 States" was happening.

Anyway, after 2 years of living together, I finally married Computer Science and have presently settled at Thiruvananthapuram, where I work. My marriage has not taken away my love affair. Sometimes, I wonder if made a wrong choice in not marrying English. But as they say it 'familiarity might breed contempt'. I never entered into a formal relation with English - and that is what makes what we have special. We never get to see each other close. That way, the romantic idea that is in our heads about each other remain the way it is. I am happy knowing that she would always be there for me, when I would be broken by the frequent silly fights I have with my spouse, Computer Science.

Please do not judge me from the monogamy point of view and label me as an infidel. Some things do not work that way. 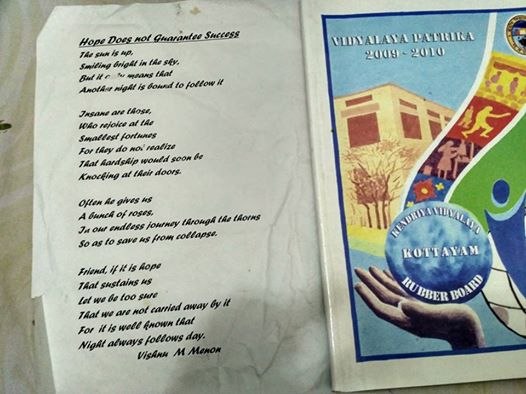