The year 2013. “World’s biggest movie star” Shahrukh Khan joined hands with hit-maker director Rohit Shetty and lady superstar DeepikaPadukone to bring on screen a film by the name of Chennai Express. As the name suggests, the major portion of the story was set in the south, especially in Tamil Nadu. Mindless humor, illogical action and horrendous typecasting were generously thrown in. The critics slammed the movie and its makers. Yet, the aam-aadmi lapped it up, and Chennai Express turned out to be the biggest grossing film of the year. The pattern continued in 2014 with forgettable Happy New Year and in 2015 with the disastrous Dilwale. King Khan scooped so low that he won the infamous Kela Awards, something presented to the worst performer of the year. People started to write him off as a serious actor.

Fast forward to April 15, 2016. Like the tagline of Fan says, it all began with a connection. Shahrukh’s transformation from an ambitious Delhi youth to being the Baadshah of Bollywood was through intense portrayal of varying emotions in movies like Darr, Baazigar, Devdas, Kuch KuchHota Hein, Swadesh, Veer Zara, Chak De, Don and My Name is Khan to name a few. That connection between the actor and scripts with a soul was never lost. That could be the reason why the actor decided to stretch himself for the dual and contrasting roles of Aryan Khanna and Gaurav Chanda when Maneesh Sharma offered  Fan to him.

SRK deserves praise for doing Fan for multiple reasons. For starters, you would not see any of his usual mannerisms or style in the role of the obsessive and ardent fan, Gaurav. Khan has pushed himself very well and has wowed the spectators with an impressive performance. Secondly, it is not a cakewalk for a fifty year old to essay the role of a teenager in a convincing manner. Prosthetic makeup, and ample use of technology including motion capture have been efficiently put into use. Then the point of consideration is that unlike any of his recent movies, Fan is not a purely commercial venture, with unnecessary masala not added to spice up things. People say an elegant heroine and romantic songs are the USP of Khan’s films. You would see neither in Fan.

So, is Fan a perfect product? A classic? Unfortunately, not so. The storyline is loosely what comes to a person’s mind as they watch the trailer of the movie. An obsessive fan of a reigning superstar and how certain circumstances, places them at loggerheads. While the pre interval portion of the movie is engaging and has depth, the storyline reduces to that of an ordinary thriller in the second half. That does not make Fan a bad movie, never. It is just that the plot could have been better executed.

The sad fact is that while a Chennai Express sets the box office ringing, an experimental attempt like Fan does not find much takers. This is not a very positive sign for the movie industry, as quality of the content would decline if money flows only in the masala path. We need to stop for a bit and analyze who is at fault – is it the audience who are ready to spend bucks for colorful entertainers but are hesitant in the case of realistic movies, or does the fault lies with the filmmakers themselves, as it were they who spoon-fed the idea that exaggerated, happy ending movies are entertainment, and realistic movies are for intellectuals? Think, and more importantly, act. 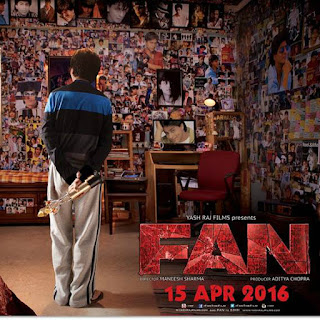