April 06, 2016
Indians, countrymen! Lend me your attention. For I am here to show you how Marvel Comics have exploited our vast mythology to come up with their league of superheroes, known as The Avengers.

As you may be aware, The Avengers consists of Captain America, Iron Man, Thor, Incredible Hulk, Hawk Eye, Black Widow and Ant Man. What you may not have realized the characterization of each of these superheroes was influenced by our own folklore.

drink up me hearties yo ho

I assume you to be pretty skeptical at this point. So let us introspect each of them closely (and hopefully wipe that smirk off your face).

Captain America: A veteran soldier who participated in the World War II, and then entered a state of seemingly endless sleep that lasted seven decades. He was recalled by S.H.I.E.L.D when they needed his services for another possibly catastrophic war.

Those who have read The Ramayana would be familiar with the character of Kumbhakarna, the younger brother of demon king Ravana who was awaken from his six month slumber by the Lanka troops to get him ready for the final battle with Lord Ram.

Iron Man: The billionaire philanthropist Tony Stark gets a tad unlucky when he is kidnapped. To escape captivity, he designs a powered suit of armor. When suited up, defeating Iron Man is a herculean task.

If we list out the unlucky characters from The Mahabharata, my bet is on Karna to top the list. He is a master in archery, and is literally indestructible when he wears his armor and earrings gifted by his godfather, The Sun.

Thor and Loki: Marvel themselves have confessed that these two characters have been taken from the Norse mythology. Yet if we are to consider the fact that these two half brothers fight each other, arguing who among them is the true king, one cannot be blamed if he/she is to relate Thor and Loki to Yudhishtira and Dhuryodhana.

Incredible Hulk: Here, the Marvel guys have done a smarter work, as Hulk is a culmination of 2 different avatars from our legends. The brute physical strength of Hulk is an obvious inspiration from Bheema.

But one must not forget that Dr. Banner turns into the all destructive Hulk when he unleashes the rage within. Lord Shiv is also popular for his third eye, which when opened in seething rage lets out an all consuming flame.

Hawk Eye: Hawk is a bird known for its excellent eyesight and ability to locate preys from huge distances. Hawkeye is a master in archery. Needless to say, this "hero" is the Marvel version of Pandava prince Arjuna, who is well known for his skills with the bow and arrow.

Black Widow: I must admit, here the play by Marvel is so subtle that one begins to wonder she is original after all. But on deeper prodding, we can find some similarities with Droupadi.

Droupadi was also known as Krishna, due to her dark complexion. Krishna means black in Sanskrit. See? Also, Mahabharata suggests that among the Pandavas, Droupadi had a soft corner towards Arjuna. The Avengers too seem to follow this, by showing a special bond between Black Widow and Hawkeye.

Ant Man: The latest addition to the team has the super-power of being able to shrink down to the size of an ant, and grow up to gigantic proportions.

Lord Hanuman is also said to have the exact same powers in both The Ramayana as well as The Mahabharata. 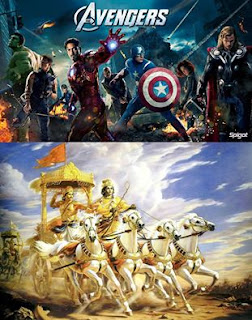