I sat down to watch the movie with the premonition that the name “Sulemani” had some relations with the Malayalam word “Sulaimani”, which means black tea. To my surprise,” Keeda” apparently means pain, and the title of the film could be loosely translated as “pain in the ass”.

The freshness that was experienced in the title was sustained throughout the 90 minutes duration of the movie. Sulemani Keeda tells us the tale of two wannabe writers, who aspire to go beyond the conventional stereotyped notions of mainstream Indian cinema. The presentation, character descriptions are all based on the realities of today’s society. The story deals with their struggles, both in the film industry as well as in their social lives on light notes with mild dosages of adult humor.

I am not gonna play the spoiler here, but let me narrate something which I felt quite remarkable. Our two protagonists go and meet the son of a Bollywood producer, who asks them to think out of the box and all. But as the story progresses, he is forced to fit into the ordinary. Likewise, the film starts with an unusual style in the beginning and then it adapts a more conventional pace as it proceeds. The take on Chulbul Pandey and Singam was hilarious. 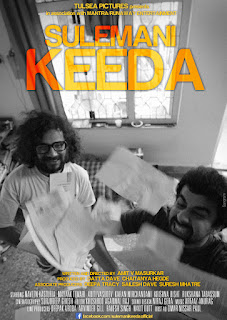