TV Review : On Air with AIB

Before reviewing On Air with AIB, let us have a prologue on All India Bakchod, or AIB as they are popularly known. AIB is a group of stand up comedians who started as a YouTube channel, using humor effectively to highlight matters of significance, explaining things in very simple manner so as laymen could grasp stuff. One prominent example is when they did a video explaining the concepts of net neutrality and urged the audience to file petitions to TRAI.

Though they had a niche audience for their videos, AIB got real famous after their Roast program, which drew flak from public for its explicit content.

Coming back to On Air with AIB, this is a TV series they launched last year. Season one completed recently with ten episodes, each single episode catering to some gripping issue neglected by most of us. Each episode has different sections, titled "Can You Not", "Topical-ish" etc. English version is handled by Rohan Joshi and Ashish Shakya while Gursimran Khamba and Tanmay Bhat does the show in Hindi.

Do watch it guys. It is fun. It is informative. It is innovative. I must warn you of the liberal use of adult comedy throughout the session, but that should never be a deterrent. 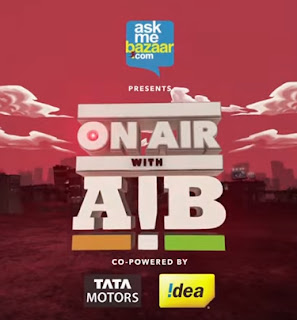