The concepts of birth, life and death have always fascinated the imaginations of human beings. Though the scientific base to the theory is debatable, most religions around the globe preaches of an afterlife after death. Hence, when someone passes away, it is the duty of his family and friends to make sure he reaches the other world safely. In this regard, funeral ceremonies are very elaborate and pious. The astounding  pyramids of Egypt bear testimony to the fact that most of us considers death as a passage rather than the end. However, the persons entrusted with the role of preparing the deceased in their journey to the next world do not often get the deserved attention in the society. 2008 Academy Award winner (for the best foreign language film) Departures tell the tales of one such man.

Daigo Kobayashi is an ordinary young man who lives a simple life with his beautiful spouse, Mika. Though he earns his livelihood playing cello at an orchestra, his career is cut short and the job of handling the dead inadvertently lands on his hands. The core of the movie is how he deals with this particular job, which is looked down by the society despite the fact everyone needs their services at some point of time. The new job does have its impact on his mental health as well as on his family life. The movie also shows the strained relationship between Daigo and his father, whose face he could not remember. Besides all these, there are very singular elements in the film that leaves space for some thinking.

The 'lady at the bathhouse', the fact that the 'living eats the dead to survive', the 'stone letter' etc are some of these. Interestingly, this movie shows the act of eating in a raw and unsavory manner. 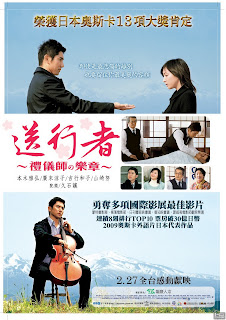