The title of the film is quite unusual, so is the movie itself. If you ask me the story, it is pretty much simple and one dimensional - but if you watch closely, you realize the plot is pretty intense and layered.

The movie opens up to reveal a simple floating monastery, with a master and his young disciple being its only inhabitants. These two spend their lives praying and preparing herbs. As the story progresses, we see different stages of their lives, drawn to an analogy of changing seasons.

The essence of the movie could not be fully digested if you are not at all familiar with Buddhist beliefs  and symbols. For instance, rooster, cat and snake symbolize lust, fighting of evil, and anger respectively.

This is a philosophical account, and probably supports the cyclic theory of life. The movie has a very slow pace, and dialogues are used only where you could not do without them. 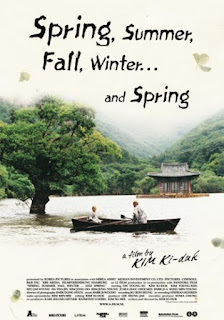