Wild Tales is a brilliant anthology offering from the Argentine movie industry. As the name suggests, each of the six tales could be best described wild. Although each story differs from the other, there is something that binds them all.

Most tales in the film are of people who have been wronged at some point of their lives, and how they respond to such uncomfortable situations they find themselves in. Some of the stories are particularly wild, or crazy.

This is a brilliant piece of work, which sets the viewer's mind thinking. 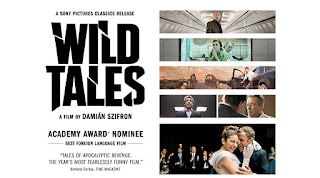