All of us know that ABCD (short for Any Body Can Dance) is a dance based movie series conceptualized on the lines of popular Dance movie franchise, the Step Up. Surely, ABCD 2 is the second installment of the series, but it is not a sequel per se. The story is not a continuation of the first part even though some actors (read dancers) have been retained.

To put it short, it is the tale of a dance team which gets bashed publically for having copied dance steps, and their subsequent struggle and eventual rise to the top. Varun Dhawan and Sradha Kapoor has been roped in, probably to increase the marketability. Nevertheless, both justified their selection with some quality movements.

The movie has its dose of melodrama, and at times the story seemed just as an excuse to take the film forward. That said, the choreography has been top class, so are the exquisitely colorful frames which is a treat for our eyes. Charlie Chaplin dance is particularly fun to watch. The technical side is quite good and they have done a neat job on the 3D effects. Coming to the songs, Sun Sathiya is a soothing melody, while Bezubaan Phir Se makes our feet tap.

Overall, ABCD2 delivers what was expected of it. A choreographed entertainer. 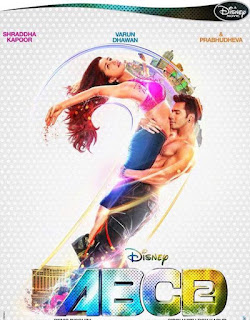