It was the last few days of British rule in India. The last viceroy of India, Louis Mountbatten, had called for a press conference. This was to be a red letter day in the history of India and Pakistan, as the British were formally declaring the end of their regime in India, signaling our long cherished independence. The news was on expected lines, since the Labor government in Britain had exhausted its exchequer by the end of the World War II. There was, however, a catch. India would no longer remain the same united nation it was. India was to be partitioned into the two new and fully sovereign dominions of India and Pakistan. The provinces of Bengal and Punjab were to be divided between the two new countries. The British had taken advantage of the two nation theory flaunted by some of our local leaders. Nonetheless, independence was good news and most of our national leaders were upbeat. Most, not all. A man by the name of Mohandas Karam Chand Gandhi was opposed to the idea of dividing our land along religious lines. He observed ‘maunvrit’ on that day. He later became the father of the nation.

Ten year old Luis was excited to death as he rode pillion with his father. Luis had learned the game a year ago, and last month he had won the school championship at his level. He wanted to go for professional training, and his parents obliged. Gambit was a one of the most reputed institutes in the city that offered training in chess. After twenty minutes of dodging the traffic, Luis and his dad reached Gambit. 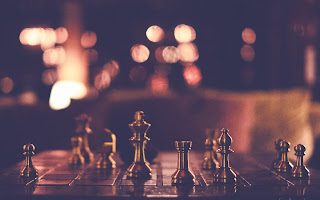 An open session of the Hindu Mahasabha was progressing in Ahmedabad. Writer and poet Vinayak Damodar Savarkar rose to give his presedential address. His words were to have terrifying repercussions later.
‘India cannot be assumed today to be a Unitarian and homogenous nation, but on the contrary there are two nations in the main - the Hindus and the Muslims. Dharma of a Hindu being so completely identified with the land of the Hindus, this land to him is not only a Pitribhu but a Punyabhu, not only a fatherland but a holy land.’ And so he went on. The amusing fact was that Savarkar was an atheist.

“What is your name, child?” a young man asked Luis.

“Hi Luis. I am Mohan. I would be your mentor in Chess from here on. Do you want me to start from scratch?”

“I know the basics, sir. I intend to play as many as I can, and improve my game.”

“It’s not about the numbers, son. What matters is how well you read your opponent. Shall we begin?”

Mohan led young Luis into a hallway. Many kids like him were engaged with their games. Mohan showed him to an unoccupied table. The board and pieces were all set. The kings, queens, rooks, knights, elephants and soldiers in black and white quite represented a battlefield.

Like most kids, Luis had a thing for black. Mohan had to make the opening move since he had the white pieces.

‘e4.’ Mohan made the opening move.

Luis thought for a moment, and made his move. ‘e5’

Mohan studied the board for some time, and decided. ‘d4’

Luis’ eye widened when he saw it. He double checked. How could his master not see that? Mohan had advanced his pawn to a dangerous spot, where Luis could simply capture the piece. He was elated.

By then it was common knowledge that British rule in India would end soon. The Muslim minority of the country feared that if the British just pulled out, Muslims would surely suffer at the hands of overwhelming Hindu majority. The Muslim League Council had decided it was time to demonstrate their strength and unity. This eventful day was proclaimed as the ‘Direct Action Day’ by Muhammad Ali Jinnah, in the demand for a Muslim homeland in British India.  That very evening, in Calcutta, Hindus were attacked by returning Muslim celebrants. The next day, Hindus struck back and the violence continued for three days in which approximately four thousand people died. Hindus and Muslims in equal numbers. India was bleeding itself in the name of religion. The amusing fact was that Jinnah was an atheist.

‘e x d4.’ Luis had drawn the first blood, by capturing a white pawn. He looked into his mentor’s eyes. Mohan’s eyes did not show any emotion. He just sat there, pondering his next move.

‘d x c3.’ Luis captured a second piece. Things were getting more and more exciting. His mentor had probably underestimated him.

‘Bc4.’ Instead of capturing the black pawn, Mohan had advanced his bishop.

Luis continued with his killing spree. ‘c x b2.’

Massive population exchanges occurred between the two newly formed states in the months immediately following Partition. Once the lines were established, about 14.5 million people crossed the borders to what they hoped was the relative safety of religious majority. This is one of the greatest forced migrations in human history. Amid the massive confusion and panic, up to 1 million people died; while untold numbers of women suffered a fate worse than death -- they were raped, sometimes tortured, gang-raped and murdered.

Finally, Luis did lose a piece. His pawn at b2 was captured by the bishop. Rapid exchanges followed. Luis posed a check using his bishop but that was blocked. They both castled.

Luis no longer felt the air of superiority. Most of his pieces were still closed, while Mohan had opened up his game and gained central control. He was attacking aggressively. Luis started panicking. A few more moves were exchanged.

“Checkmate.” Mohan had won the game. Luis felt down.

“It’s alright, Luis. You played well. Let me tell you what happened here. I offered you a few of my pieces.  You became obsessed with capturing them and missed the larger picture. This is a well-known tactic in chess. We call it gambit.”

Hindustan, which had been a mighty empire once, was now a group of weaker nations with constant in-fighting. India and Pakistan are yet to resolve sensitive border issues even after four wars. Six decades have passed since independence, yet we are nowhere near peace. While agreeing for partition in return of independence, we had unfortunately accepted the Queen’s gambit from The United Kingdom.