Premam is the malayalam word for love, and the movie simply justifies the title. Premam traces the life of George, and his love affairs of varying shades right from his school days to his wedding years after.

The young director has been creative with his work, and there were many refreshing elements on screen. There are a few gags for maintaining a light mood, and songs and dances in the background of exquisite visuals spice things up. And the result is a blockbuster opening for the movie.

Actor Nivin Pauly is achieving kind of a cult status among the film buffs, particularly so in the case with the young audience. That is probably because most roles chosen by him belong to that category which could be identified by majority of the youth. Excessive sequences of drinking and smoking by the protagonist and his friends off put the reviewer a bit.

To sum up, Premam entertains, not necessarily inspires. 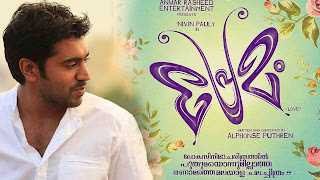