Meghna, a lady in her primes hits a low in life when successive tragedies happens in her life. Her mother dies, her father remarries a woman whom she could not connect with, her boyfriend cheats on her, and she loses her job. She feels she has suffered enough and decides to end her life. That's when Anand enters life. But, unlike in most films, Anand does not bring rays of hope into her life.

Anand runs a rather secretive society by the name Hemlock Society, which gives people who wish to suicide a fully professional course on how to do it. He takes Meghna for a three day crash course. The rest is best watched on screen.

The movie may not figure in the best movies of all times. The plot is predictable to an extent. Still, the two hours would not be time wasted.

Love in the time of suicide. 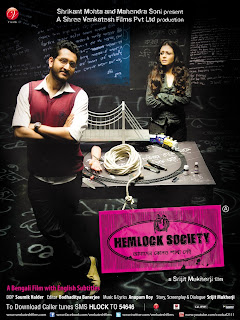