May 21, 2015
(The train of thoughts for this one was born from a casual conversation I had with my good friend Sooraj Pattazhy. Thanks buddy.)

I quietly lay there hung in the fourth storey of the garment store, so that people coming and people going could see me and marvel at my elegance. My makers had taken considerable time and effort in selecting the best for me. The best linen, the most aesthetic design, the most suitable hues... there was no compromise down that line. I had noticed how that obese son of that affluent daddy had laid his eyes on me. Despite the umpteen numbers of shirts the outlet had in offer, this kid was obsessed with me. The kid seemed remiss, someone who could not acknowledge the value of things, and I disliked him instinctively. Nevertheless the child got what he wanted. His wardrobe was now my home.

It was the birthday party of one of his friends, and he decided to use me to conceal his flabby body. Pastries, juices and chocolates made their rounds throughout, and he devoured them all without a break. By the time the party was over, I stank of cream and cocoa.

I was stained, and I felt ruined.

I was with my friends, finally realizing that long cherished road trip to Goa. My best friend had convinced his father in taking his sedan, and he was on the wheels as my friends and I rested.

We were cruising through the highway in an uneventful manner when one of my friends noticed a woman who was riding a scooter. My friend decided to have some fun. He started whistling. She ignored him. That did not douse his spirits though. Soon he graduated from whistling and began asking her out. I asked him to shut up, but for no avail.

When she felt that she had tolerated enough, she reacted. She started calling names and honked to grab attention. We panicked. My buddy hit the gas hard and we fled the scene.

Our relief ceased to exist as we reached the next signal, which gave us a red. Soon she caught up with us. She stopped right next to us, and started shouting. That was a scene of interest for the highway patrol. Our hearts raced. We were in a roadblock indeed.

Our families were informed, and we were let off with a firm warning and a hefty fine. Needless to say the trip was called off. People began to look at us in a new low.

I was stained, and I felt humiliated.

I woke up as I felt a sharp pang in my lower abdomen. Darkness persisted, and dawn seemed far away. I turned on the lights to my room. It was not even four in the morning. The pain was unbearable, as if somebody were eating me up from the inside.

Then I saw the sight that shook me whole. My clean white bed sheet was not clean anymore. There was blood all over. Terrified, I looked around. No there was no intruder. I checked my body for any possible injuries. I couldn't find any.

Slowly it dawned up on me. I was making that transition from a bubbly girl into a woman. A woman. I knew because my friends had told me their stories. I had to call my mother but somehow I couldn't. I was drained. People would now tell me to stop being childish and learn to be graceful. I would not be allowed to enter the temples when I bled. They say a bleeding woman is impure.

I was stained, and I felt worthless.

I was still young, born hardly one month ago. I was proud of being white and fresh. Shortly after my birth I was put in a case along with hundreds of similar looking cousins, and was carried off to a far away retail store. I spent a couple of days there, and one afternoon a tall man came and bought me. He took me to his home. His friends called him 'The Mad Writer'. I didn't know why as he looked pretty normal to me. Nothing remarkable happened in the following week.

One fine morning, the mad writer pulled me out of the case and clipped me to his board. He then dipped his Mont Blanc in a decorated ink pot. Before I knew what was happening, he started scribbling on me. He kept on scribbling, pausing only to quench the thirst of his pen. Once he was done with me, he left me to dry. I was enraged to find that my white skin was now scarred with blue.

The mad writer invited his friends to have a look at me. One by one, they looked at what was written, and I could see appreciation and wonder in most pairs of eyes. The words 'awesome', 'brilliant', ' amazing' were generously tossed in the air. The mad writer was elated. He even kissed me hard. By then my anger had melted.

I was stained, and I felt priceless. 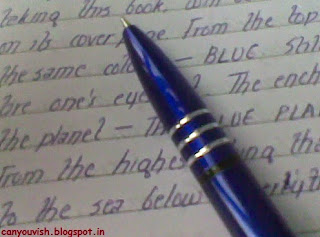